Too Much Kissy Face

Hokay … so I used the term “kissy face” in a pickwickian manner simply to garner your attention.

Is there too much lip lock happening on The Walking Dead? Many fans would throw out a resounding “Yes!” when it comes to the scenes with Glenn and Maggie. It seems every time they’re reunited the kisses come gushing at you. (Still, that’s understandable given the world in which they reside, so I don’t have a problem with that.)

Instead, I’m going to address a different point about smooching … and I’m sure you know exactly where I’m going with this one: The kiss between Aaron and Eric, with a caveat.

It was evident the two had a relationship, completely apparent they cared for each other. There wasn’t any need to put that “I love you” out there to further bolster the fact.

Here’s the deal: The 600 lb. gorilla in the room wasn’t the kiss the both of them shared during “The Distance” when Aaron discovered (much to his relief) Eric was okay. Many would say that that was the gorilla throwing its weight around. Again, scan the media sites, the message boards, the articles and anywhere else and there are tons of pros, cons and “Who gives a rat’s ass?” responses when it comes to the scene. Many in the LGBT community are praising it while others are lambasting such effeminate characterizations. Some homophobic contingents are crying foul it even got aired. And more than a few parents’ groups are up in arms about their innocent progeny witnessing such outlandish behavior in such a popular show. (News Flash: Parents? I’m willing to bet dollars to Ding Dongs your kids have seen and heard a whole lot more than where that kiss came from.)

So, what am I stirred up about if Aaron and Eric’s prolonged peck wasn’t that gorilla? It was the “You weren’t worried, were you? This is your fault you know … I love you” that came afterward from Eric. I can’t speak for anyone else but it insulted my intelligence.

Duh. Of course they’re in love.

Stop and evaluate everything that went on up until Eric’s admission: Aaron’s frantic look and reaction at seeing the flare near the water tower, his willingness to knock Michonne on her ass getting out of the car to find out where the flare came from, his search for Eric at the warehouse when he, Rick, Michonne and Glenn were finally reunited with the group, his rush to get inside the place to see Eric’s condition, the conversation leading up to the kiss, the conversation afterward. Every last one of those things was a telling clue. And still the writers thought we needed to hear an “I love you” to cement the obvious bond between the two?

I’m not brainless or naive, at least not on this point. It was evident the two had a relationship, completely apparent they cared for each other. There wasn’t any need to put that “I love you” out there to further bolster the fact. Maybe I’m picking nits here but it bugged me … and it unnecessarily detracted from scene. And I’m not alone. I’ve had several conversations about it with others who are in agreement it was overkill.

But let’s face it: The Walking Dead is about excess, overkill. And, sometimes, too much.

Speaking of excess and overkill, how about the walker that got the flare to the eye courtesy of Rick? Or the gauntlet of walkers Glenn had to maneuver through on Route 23? Let’s head back to the beginning of the episode — how about Rick’s welcoming roundhouse punch to Aaron’s kisser? No question all of those things had to please the shock and awe crowd.

But all these “too much” elements? They’re exactly what make the show the success it is.

And with a season 6 solidly in the works and a companion series soon to debut, there’s even more of that excess yet to come.

Tune in next time when I talk about the glut of Eugene’s dippy dialog. As example, while he was playing cards with Tara on the way to Alexandria: 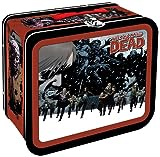