The Snugg iPad Mini case is solid but imperfect Is the The Snugg’s impressive lifetime warranty a blessing or just asking for more inconvenience than it’s worth?

I made the leap recently from a full-sized iPad to one of the new Retina display iPad Minis. For what I use the iPad for, the smaller size is definitely a better choice, and the added display improvement was just what I was waiting for. So far it’s been worth it, but that’s for a different story.

With the larger iPad, I didn’t want to bulk it down further with a case that wrapped around the entire thing, so I stuck with the Apple Smart Cover, which only protects the screen when closed and serves as a means for propping the device up on flat surfaces for reading. With the iPad Mini, though, I was willing to give a full-wrap cover a shot, and The Snugg looked like a decent option.

The Snugg has a couple of neat things going for it. It has a handy spot to stick a pen (whether it’s a real one or a stylus), a spot in back to anchor the front flap for propping the device up, and a large elastic band for either storing papers or wrapping your hand through to ensure you don’t drop it while flailing your arms about as you yell at a board meeting. The front cover does function just as a Smart Cover does, in that the screen turns off when you close it (it has a magnetic switch that interacts with the device.) And, of course, there’s the lifetime warranty, which is said to cover manufacturing defects.

And, of course, there’s the lifetime warranty, which is said to cover manufacturing defects.

The first thing that I will say worried me about The Snugg was that it was put together with stitching. Past experience has shown me that this stitching doesn’t last very long, often getting pulled out over the course of normal use. However, this is the very thing I consider to be relatable to a manufacturing defect, unless of course you very obviously cause the stitching to pull out.

While the iPad fit very “snugly” in the Snugg — and it’s very well secured in it via strong velcro that discretely curves around the side of the device — it’s not quite perfect in how everything gets placed inside. Take for example this photo of the volume controls: As you can see from the yellow arrow, the lower volume button is almost covered by the case, which makes it awkward to reach. I’ve tried numerous times to readjust the case to improve this positioning, but it’s just not happening. It’s not the end of the world, but it can be pretty distracting. The sound toggle switch is also somewhat difficult to get to, but unless you’re using it very often, it may not matter to you.

The other thing to note in that photo is the red arrow, which is pointing to … loose stitching. Yes, it already has stitching pulling out, and this was only after a few days of light use. I feel as though it’s only a matter of time before more of these appear.

Yes, it already has stitching pulling out, and this was only after a few days of light use.

One other negative I’d have to give The Snugg is how the front cover folds under the device and into the slot that allows you to prop it up. As you can see in the two photos below, the first shows how the device should be propped up, while the second shows you how the small fold in the cover can make it awkward or confusing to a user as to whether the entire thing is folded down all the way or not. I know it seems like you’d have to be a dum-dum to not figure that out, but when you forget about it the first time, you’ll find it annoying. The Snuggs are available for all types of iPads and even iPhones, and they’re pretty reasonably priced and available in many different styles and colors. My biggest question now is how well the company fulfills warranty issues and whether, over time, any stitching that comes loose will be covered as a fault of theirs and not considered “normal wear and tear.” If they’re willing to replace it, how many times will it take before it’s just not worth the hassle anymore?

[NOTE: The reviewed device was provided for free by The Snugg.com to CliqueClack for the purposes for review.] 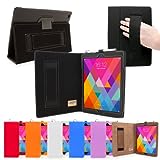 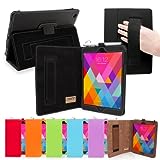 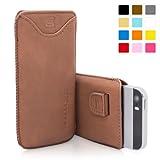