The third film in the set is the real jewel of the collection, MGM’s Kiss Me Kate (1953). Based on the Broadway musical by Cole Porter, Kiss Me Kate tells the story of divorced actors who are cast in a musical production of The Taming of the Shrew. Fred Graham (Howard Keel) and Lilli Vanessi (Kathryn Grayson) are not on the best of terms and Fred’s new girlfriend Lois (Ann Miller) only complicates matters as they must deal with each other or force the show to fold. The film also has comic relief in the form of Keenan Wynn and James Whitmore (neither of whom had ever been in a musical), and features up-and-coming dancers Tommy Rall, Bobby Van and Bob Fosse, who got his start in this movie thanks to Ann Miller.

The movie is great fun and features a classic score from the Cole Porter songbook including “Too Darn Hot,” “Wunderbar” and “Brush Up Your Shakespeare.” The Blu-ray presents the audio as a DTS-HD Master Audio 5.1 mix and it sounds spectacular, as you would come to expect from a Warner Home Video presentation. The video is also stupendous, bright, colorful and presented in a 1.78:1 aspect ratio. Best of all, the Blu-ray also includes the original 3D version of the film, and I take my hat off to the folks at Warner Brothers once again for the stunning restoration. The 3D literally flies off the screen as the actors do all they can to make sure the 3D process is used to its best potential. While the film was shot in 3D, it got a very limited theatrical release because the fad had nearly died out by the time production ended but with the Blu-ray 3D presentation, it stands as one of the best 3D productions of the era, and the disk is comparable to the excellent work Warner Brothers did with House of Wax. Let’s hope they delve deeper into their 3D catalog.

While the film presentation is stellar, the extras on this disk are a bit underwhelming. They include:

While it’s wonderful to have these classic musicals restored and preserved in HD, I have one complaint about the 4-Movie Collection — why include Singin’ in the Rain? The film got a deluxe 60th anniversary box set release in 2012, followed by a single-disk Blu-ray release (the single disk in the collection is the same stand-alone release). Any true musical fan will most likely own one or the other of these already, so its inclusion in the 4-Movie Collection may deter people from buying it. A better choice would have been MGM’s Silk Stockings, starring Cyd Charisse, one of the first musicals to be filmed in Cinemascope with stereophonic sound (there’s even a song in the movie about those things!). It really was a missed opportunity, but you still have the option to purchase each film individually. Either way, if you’re a fan of musicals and have 3D capability, then you will most definitely want to pick up these classic films. 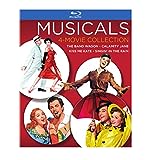