Clacked by Katie Schenkel on Saturday, January 18, 2014 · Leave a Comment Warner Bros. has announced an all new, all-ages Justice League animated movie … and it comes out on Tuesday!

This was not something I expected from this week!

Through his twitter account, Green Lantern: The Animated Series producer Giancarlo Volpe has been teasing for a while about a special super-secret project, including letting people know he was working again with Green Lantern composer Freddie Wiedman and posting pictures with some of the cast of GLTAS in the recording booth. Because he was quick to explain that the project was not Green Lantern related, and because I know he’s been working on some video game projects since GLTAS ended last March, I didn’t even think the project was going to be a cartoon.

Welp, turns out I was wrong. Announced on Wednesday, JLA Adventures: Trapped in Time is the actual secret project that Volpe directed. It’s a DC cartoon. And it has a ton of my favorite voice actors in it. And Jason Spisak is voicing the Flash.

And this was around the point where I started flailing at my desk like the nerd that I am.

I can’t wait to hear all of these particular voices in one production.

So here are some things we know about the 52 minute cartoon thanks from the mouth of Volpe — several of the Green Lantern cast members (Spisak, Grey DeLisle, Kevin Michael Richardson, Diedrich Baker) are indeed lending their voices to the cartoon. GLTAS writer Mike Ryan helmed the script and like I said earlier, they got the very talented Freddie Wiedman for the soundtrack. I’m also looking forward to DeLisle’s Avatar: The Last Airbender cast members Dante Basco and Jack DeSena joining the others. The choice for DeSena as Robin is particularly inspired. Almost all of these actors have worked with each other before and that can breed such great performances. I can’t wait to hear all of these particular voices in one production. Oh, and the character designs were headed by Lynell Forestall, who created the excellent Black Lightning shorts from last year. From the look of the DVD art, the designs are really classic and promising. I’m looking forward to see if the animation holds up.

What’s really outstanding about this announcement is that JLA Adventures: Trapped in Time is a kid-friendly story of the Justice League fighting head-to-head with the Legion of Doom. So many of the made-for-DVD DC features are clearly written for adult audiences (last year’s Flashpoint Paradox, for example); it’s refreshing to know we’re getting a more lighthearted adventure story with these characters. Knowing they’re going for that tone, it makes sense that they chose Bader to once again voice Batman since he was outstanding as the Silver Age-esque Dark Knight in Batman: Brave and the Bold.

In my mind, Spisak will be voicing Wally again and you can’t convince me otherwise.

The big question that almost immediately went though my brain is if Spisak (who voiced Wally West as Kid Flash in Young Justice until that show broke my heart and ended in March along with GLTAS) would be voicing Barry Allen Flash or Wally West Flash. Even though DC announced recently that Wally will finally be back in the comics, we haven’t seen him in the animated features for years now. I posed the question to Volpe, who was gracious enough to answer. Basically, they’ve intentionally not mentioned in the story which Flash it is so the audience can decide which Flash it is. While this doesn’t guarantee that this Flash will seem like the Wally we love, this is certainly better than when Justice League: Doom had JL/JLU’s Michael Rosenbaum cast as the Flash but had him be Barry. But yes … in my mind, Spisak will be voicing Wally again and you can’t convince me otherwise. Let me have this.

JLA Adventures: Trapped in Time is coming out this upcoming Tuesday, January 21st, but it has a very limited release — only in the US and only at Target stores. It’s frustrating, but just another reason it’s important for American fans of these actors, animators and characters to go and support this DVD. 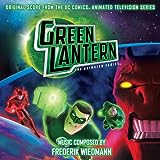