Disney’s Secret of the Wings will enchant the entire family Don’t look down your nose on Disney’s new direct-to-video feature ‘Secret of the Wings.’ It’s a magical experience for children and adults of all ages.

You know how they say you shouldn’t judge a book by its cover? Well, I have to admit that I’ve been guilty of that when it comes to most direct-to-video movies, especially those aimed at the Disney target audience. I’ve enjoyed plenty of Disney’s theatrical films over the years, including many of their animated films, but I’ve never given a thought to taking a look at any of the animated films made directly for the home video market. Especially when it comes to the series of Tinkerbell movies, which like the Disney princesses, I assumed were made specifically for little girls.

So when the new “Tinkerbell Fairy Movie” Secret of the Wings arrived on my doorstep (courtesy of Walt Disney Home Video for reviewing purposes), I was intrigued especially because I was also fortunate enough to receive the 3D version of the film. The cover artwork alone was gorgeous, but I was still not sure how much time and effort actually went into making a feature-length film that’s not going to be seen on a giant screen (for the most part, that is, because Disney has been screening this film theatrically for invited audiences). From the moment the disk booted up, I have to say that my sock were completely blown off.

I was totally drawn into the story which is simple enough for the child viewer but not simplistic for the adult.

Secret of the Wings is another in the Tinkerbell franchise of films, and for someone like me who only knows Tink as the mute fairy from Peter Pan, it’s strange to hear her talking … but I guess Disney doesn’t really have a market for films where the main character never speaks. Once I got over that hurdle, I was totally drawn into the story which is simple enough for the child viewer but not simplistic for the adult. Tinkerbell and her friends are “warm” fairies, meaning they live in a world where spring meets winter and they are forbidden to cross over into the cold realm. But Tink wants to know what it’s like over there, so she concocts a plan to get her across the bridge into the snowy world to get a taste of the cold climate. She learns, however, that her wings are not made for the cold and almost damages them beyond repair before returning to the warmth. She figures out how to keep them warm for a second journey and then discovers something wondrous … another fairy named Periwinkle who, it turns out, is Tink’s twin sister separated at birth (or by the wind … I’m still not sure how fairies are born). But with the rules forbidding the two worlds from mingling, how will the sisters bond?

The screenwriters put a lot of effort into making the story engaging on many different levels.

Secret of the Wings is filled with great characters voiced by some wonderful actors including Megan Hilty (Rosetta), Timothy Dalton (Lord Milori), Lucy Hale (Periwinkle), Anjelica Huston (Queen Clarion), Matt Lanter (Sled), Jesse McCartney (Terence), Lucy Liu (Silvermist), Raven-Symoné (Iridessa), and Jane Horrocks (Fairy Mary). Kids may not care about the voices, but sometimes it’s a little distracting for the adults who keep asking themselves, “Who is that speaking?” Either way, it’s a pretty stellar cast. The story really scores on the emotional level as well, especially when Tink and Peri are told they can no longer see each other. It’s a truly emotional moment and I found myself getting a little teary-eyed even though I knew things were going to work out in the end (another plot point regarding the law forbidding warm and cold from crossing over is also easy enough to figure out, for adults, but it still doesn’t detract from the film). The screenwriters put a lot of effort into making the story engaging on many different levels and they skillfully manage to never talk down to viewers of any age (and having a little help from John Lasseter and Pixar probably didn’t hurt).

Secret of the Wings is one of the most visually sumptuous animated films I have ever seen.

Aside from the actors and the story, Secret of the Wings is one of the most visually sumptuous animated films I have ever seen, especially one made directly for video. The scenery is gorgeous and colorful on the warm side, and all icy whites and blues on the cold side (and still beautiful, particularly if you enjoy winter scenery). I really was stunned by the level of detail in the scenery, the characters (particularly the hair), and the furry detail on the wintry costumes. The film looks amazing in 2D and, if you’re an adopter of the process, the 3D draws you into both worlds and adds even more depth to the story and the experience of watching it. I’d have to say that the 3D on Secret of the Wings is comparable in effect to Avatar. It was one of the sharpest, clearest 3D Blu-rays I’ve seen so far.

Call me a convert now. I am totally impressed by the work and care that went into the making of Secret of the Wings. Even without the 3D, the story is magically enchanting for children of all ages, with plenty of laughs that come organically out of the situations and a few genuinely heart-tugging moments that aren’t cloying. I have to say that I’ve learned my lesson and won’t dismiss outright any more of these direct-to-video features.  The video is available in several different editions, including Spanish versions (click on the links below for more information about each). Extras on the Blu-ray and DVD include the short, Pixie Hollow Games (the fairies of Pixie Hollow compete in their own version of the Olympics), a Pixie Preview of Fright Light, and two music videos featuring songs from the movie. Whichever edition of the movie you choose, I think children and adults will be extremely satisfied. 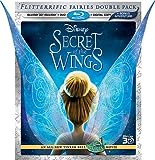